Mount Davidson is the highest point in one of Nevada's smallest counties, Storey. It's easily seen from Virginia City and much of South Reno and Washoe Valley. While only a few hundred feet higher than most of the surrounding peaks, the difference is significant. The views from it are unparalleled from anywhere else in the county. Very few other places will give you such a great look of the eastern side of the Carson range all the way to the Stillwater Range near Fallon. Storey county is rugged and forested extensively with Utah Juniper and Pinyon Pine. There is a certain novelty in being able to see the town of Virginia city almost 2000 ft directly above it.

The most popular way to approach the mountain is from Spanish Ravine. Follow the short side road from Stewart St. in Virginia City up to a small parking area (mind the signs and park in the dirt, not on the pavement). There is a rocky road leading past a few abandoned mines and further up the ravine. About half way up the ravine is a steep road that leads up along the side, along the telephone poles. Follow that all the way up to the saddle. From there, it's a short walk north along the ridge, past a maintence building on jeep trails to the base of Mount Davidson. It's about 2.5 miles and 1800 ft in elevation to the top from where you parked near Spanish Ravine.

On the top of the peak, there is a 9/11 memorial written on the stone with the tattered remains of an American flag tied to a flag pole. I imagine the winds get strong up there. Enjoy the excellent 360° vista of the nearby towns, the Flowery Range, and the Pah Rah Range. On a clear day, I imagine you can see all the way to Arc Dome in the Toiyabe range, deep in the heart of Nevada.

You can follow the same way back down. I ended up by making it a loop scrambling down the east face of the mountain. It's rather steep but doable if you switchback regular. I went up in January so snow helped my descent. In wetter winters, I imagine the snow would be too deep near the top of the peak to make it worthwhile. There are numerous other approaches on the jeep trails near the Jumbo Grade as well. I might attempt them some other time when there is less snow and in a high clearance vehicle. 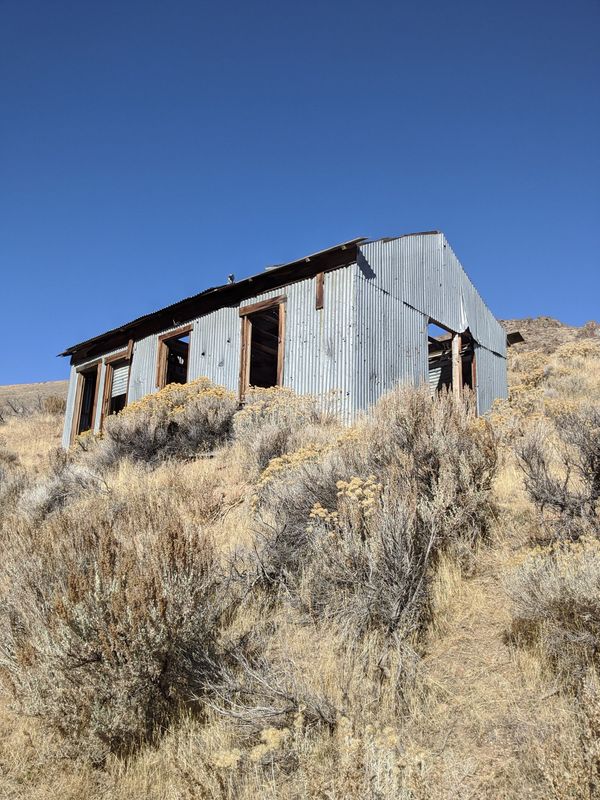 Like much of Nevada, the Black Rock Desert has a fair share of mines in it. The Leadville mine is one of the easier ones to access. Silver and lead (hence the name) was discovered here in 1909, and the mines kept producing until the early 40s. Minor deposits of